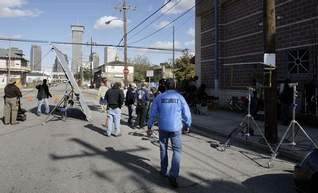 The total eclipses the state's previous record, 56 projects, set in 2007.
The activity shows Louisiana continues to grow as a filming location outside traditional production hubs in California and New York.
"It's been a great year for us here in Louisiana, and we are very excited about where the industry is headed," said Chris Stelly, head of the state film office. But with the economy in a downturn, a reality check could be ahead.
"We are prepared, with the current economy, for fewer movies to be made," said Amber Havens, spokeswoman for the state film office.
Still, Louisiana has some projects on the horizon for early 2009, including the HBO cable television series "Treme," which is slated to begin shooting in New Orleans in coming months. That project, named after the historic New Orleans neighborhood where many musicians live, will document the city's music scene, political corruption and recovery from Hurricane Katrina.
The state also is working to attract advertising production and digital video gaming and music and sound recording projects, Stelly said.
Louisiana began offering tax incentives for in-state filming in 2002, creating business for local production studios and equipment retailers that serve the industry. Stelly said $32 million in incentives were granted in 2008. Since 2002, $443 million in tax incentives have been awarded.
The incentives program has not been without problems. Mark Smith, a former state film commissioner, pleaded guilty last year to taking about $65,000 in bribes to help inflate tax credits. He is awaiting sentencing and has cooperated with federal investigators.
On Dec. 12, Malcom Petal — a producer for the films "Bug," "Factory Girl" and "Mr. Brooks," which starred Kevin Costner and was partly filmed in Louisiana — pleaded guilty to conspiring to bribe Smith. He will be sentenced later.
In 2007, a state law tightened oversight of the program, which provides tax credits to production companies that use goods and services while shooting in Louisiana.
Though roughly 40 states offer tax incentives in varying forms, Louisiana is experiencing aggressive growth, said David Bergman, spokesman for Economic Research Associates, an international consulting firm that tracks the industry.
According to figures released by Louisiana, production expenditures from movies made in this state since 2002 exceed $2 billion, including $200 million in payroll.
Being among the first states to offer incentive packages, Louisiana has had more time to establish film and television infrastructure and its talent pool, Bergman said.
"Local labor is a huge factor. Production companies look at the availability, skills and cost of local labor when they consider where to take their productions. It's not just about tax incentives."
Other states giving Louisiana strong competition include New Mexico, North Carolina, Georgia and Michigan, Bergman said.
In a 2007 study by his firm, Louisiana and New Mexico lead other states in employment growth rates in the film industry. Louisiana data for 2008 will be available in February, Havens said.
Major films shot in Louisiana this year include the Justin Timberlake and Jeff Bridges drama "The Open Road," "Beyond a Reasonable Doubt" with Michael Douglas and Jesse Metcalfe and "My Own Love Song" with Renee Zellweger and Forest Whitaker.
Along with set-shooting has come a rise in the amount of post-production work such as editing done in state, Stelly said.
"Post-production used to be almost exclusively done in Los Angeles because they wanted to be close to writers and editors. Technology is making it available to do almost anywhere."
Louisiana's growing infrastructure also is supporting post-production work, Stelly said.
It has six studios and soundstages in Shreveport, New Orleans and Baton Rouge and with at least one more on the way. Nu Image/Millennium Pictures recently announced plans to build a $10 million studio in Shreveport beginning next year.
With the infrastructure expansion has come growth in support services. One such business is Hollywood Trucks, a Baton Rouge-based company with a fleet of specialized vehicles used for hauling movie props and equipment.
The company opened its first office in Baton Rouge in February and expanded to New Orleans in September. A third office, in Shreveport, will open in early 2009, said Andre Champagne, one of the company's founders.
Champagne said his company had trucks on the sets of most of this year's projects, including "Welcome to the Rileys" with James Gandolfini and Kristen Stewart, "The Bad Lieutenant" with Nicholas Cage and "I Love You Phillip Morris" with Jim Carrey and Ewan McGregor.
Before Hollywood Trucks entered the scene, most film companies brought in set trucks from other states, said Jennifer Day, director of the New Orleans Office of Film and Video. "That's money that's now staying in Louisiana."
Louisiana also is able to handle more productions at one time because of its growing infrastructure, Stelly said.
In 2004, the state could only handle about two or three film crews at any given time, he said, but it now can handle up to 10 film crews at once.
As industry competition increases, Bergman said, states will have to battle competition from other countries wooing movie makers with low-cost labor and incentives, among them Canada, Australia and New Zealand. "This is a growing industry on a global level."
Posted by Christopher Moore at 7:26 AM