Investment Pays off with Three movies Filmed in Central Louisiana! 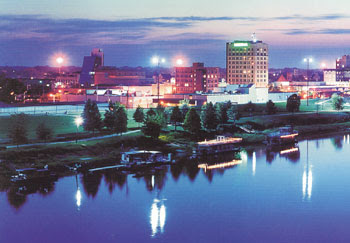 
A $5,000 investment by the city of Alexandria helped lead to the filming of three major motion pictures within Central Louisiana -- "The Loss of a Teardrop Diamond," "My Own Love Song" and "Bonnie and Clyde."

"My Own Love Song," starring Renée Zellweger, is the most recent film the city was able to entice into the local area. Production, which began Oct. 13, is expected to last a few more days.
The film crew and Zellweger took advantage of the scenery at Buhlow Lake in Pineville on Wednesday.
During its time in Cenla, this particular film crew is expected to spend $140,000 a day in various needs and operations, according to Bill Hess, Alexandria's economic development director.
"And this comes directly from the film production, these are not our numbers," Hess said.
"They're going to be buying their food for their canteen that travels with the crew and cast here," he said. "They're going to be buying hardware, lumber, transportation needs, limo services.
"Even a small, low-budget production can be a million dollars and change. For a week's shot, I think that anybody would take that. ... That's about a $200,000 return."
One ace up the sleeve of Alexandria and other Louisiana cities is the state's tax credit program aimed at film and television productions. This includes advantages like no state fees or permits for filming ,and productions greater than $300,000 are eligible for a 25 percent tax credit of the base investment in Louisiana.
But what else enabled Alexandria to land three movies for such a small buy-in?
"All of these films resulted from the (American Film Market) in Santa Monica. ... So for a very small investment, once the city got behind this and pushed it, we were able to produce tangible results," Alexandria Mayor Jacques Roy said.
The market is a trade conference that puts municipalities in touch with film professionals.
"So those people who are passing our booth are film producers, film directors, investors, location scouts. Anyone associated with television or the entertainment industry globally," Hess said.
It was at last year's market that Hess met location manager Wise Wolfe, who brought "My Own Love Song" to Central Louisiana.
"It is his job to find the appropriate locations that fit the script of the film," Hess said. "So he called me and said, 'Here's what we're looking for, here's the gist of the film.' ... Certainly, we did everything we could to have it shot in Alexandria ... but it turned out the locations were better for Pineville, Lecompte, Cheneyville and Bunkie.
"And that's why we call ourselves Central Louisiana In Film. This is not an individual effort"
Alexandria's presence at the American Film Market was made possible by contributions from other entities -- the Alexandria-Pineville Convention and Visitors Bureau, Greater Alexandria Economic Development Authority and England Economic and Industrial Development District, all of which are members of the group Central Louisiana In Film along with the city.
These same entities will put up the $15,000 to pay Alexandria's way to the 2008 event, the same amount as for the 2007 event.
"This conference is not for Mr. Hess to go to (Los Angeles) and hang out with stars" Roy said. "You sit in a booth for in excess of eight hours a day, and you talk directly to people. ... Alexandria will invest about $5,000 this year in the film festival again."
"Bonnie and Clyde" is an upcoming film the city landed while at the market. Hess said that production is estimated at $15 million, with 60 percent of the filming set for Cenla.
"This is an investment that we want to continue to do" Roy said. "I think that we're showing some promise here.
"Now on the negative side of this, at some point, we have to decide how much more you put in it depending on what the governor and what happens with the state Legislature on these tax credits. If they phase out, we will be as attractive as our sites are."
Posted by Christopher Moore at 11:20 AM