Mayday, Bering Sea Will be On Discovery Channel March 3, 2010 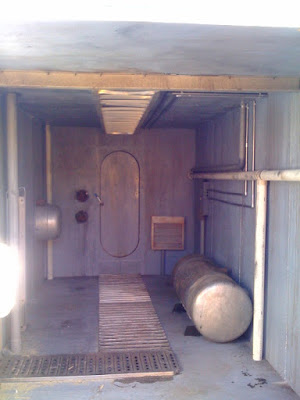 The Discovery Channel will be showing Mayday, Bering Sea this month. It will show March 3, 2010. It was shot in the Louisiana Wave Studio and in Larose Louisiana on a real vessel. I myself had the opportunity along with a great art department of building the Wheelhouse and the Rudder Room for the show. We only had a week to build it so there were a lot of hours put into the build. On the eighth day we had to deliver the Two Large set pieces to the Louisiana Wave Studio aboard two large trucks.

This is when the film crew got started. The wave tank was filled and we set the pieces in place. Amazingly, the Louisiana Coast Guard brought out two separate choppers and did real life simulated rescues for the film. With the wave tank producing up to 8 foot waves you soon forget this is not real. Choppers flying only feet over the tank and waves crashing everywhere with people in the water seemed at times like you were at sea. It was a experience that I will never forget. You can see the detail that went into this recreation as I hope everyone will watch.


On March 23, 2008, the Alaska Ranger sank leaving 47 fishermen helpless in the frigid Bering Sea, a worst ever scenario on the world?s deadliest seas. This is the true story in the words of those who survived, and the heroic account of those who did not. It was the largest at sea cold water rescue in US history. Please don't miss it. I have to say great job again for Louisiana, keep it up.