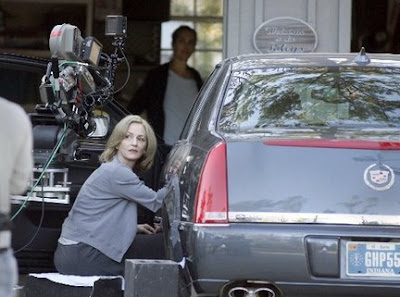 MovieMaker Magazine has announced its 10th annual list of the 10 best U.S. cities for independent moviemakers to live and work in -- and despite once again attracting record-setting levels of film and TV production in 2009, New Orleans isn't in that number.
The closest city to New Orleans on the list is Shreveport, which comes in at No. 3. Other cities that surprisingly came in ahead of the Big Easy include Stamford, Conn., which came in at No. 6, and Detroit, which landed at No. 8.
Editors at the New York-based trade magazine declined a request for a telephone interview Thursday (Jan. 21), though in responding to an emailed list of questions Friday (Jan. 23), they suggested quality-of-life issues kept the city off the list, noting that it did make the magazine's "short list."
Scott Threlkeld / T-PJames Asmus holds his cell phone up to the camera for a closeup during the 2006 production of the film 'Tug.' "While New Orleans' production activity is surely impressive -- and looks to be just as strong in 2010 -- the list truly is made up of the cities that we feel are the best places for moviemakers to work and live," MovieMaker associate editor Andrew Gnerre wrote. "In other words, as outlined in the article, there are numerous factors that are weighed in addition to production hours. Despite not making the top 10, we were surely impressed by the city's below average cost of living and numerous education opportunities."
According to a news release announcing the list, criteria considered for inclusion in the rankings involved "a swarm of factors: Cost of living, employment opportunities, housing costs, crime rates and quality of life, state and city financial incentives, access to talent, size and closeness of the local moviemaking community, ease of shooting (i.e. amount of red tape), local production resources and movie-related vendors, exposure to other moviemakers and film sets, educational opportunities and number of local screening options, including film festivals."
"There's definitely a possibility of New Orleans making the list in the future," Gnerre wrote in his email. "With an impressive slate of films in place for 2010, the city's steady work on growing the number of soundstages to attract big pictures (which give young and independent moviemakers an opportunity for "hands-on" learning) and Louisiana's strong tax incentive, things are obviously going well for New Orleans' film scene -- which hopefully will place the city back in our top 10 for our 2011 list.
"What local policy-makers need to do to make sure New Orleans' moviemaking community stays on the up and up is to ensure that the state's 30 percent tax credit remains in place, despite budget cuts elsewhere in the country."
Jennifer Day, director of the New Orleans Office of Film and Video, all but shrugged about the city's absense from the list. "I'm not losing any sleep over it," she said, noting that New Orleans has never been included in the rankings in the 10-year history of the list.
"The number of films shot in New Orleans last year alone speaks for itself. We are the proud leader of the Louisiana film industry -- and everybody knows that."
Although it's the big-name, big-budget films -- such as "Green Lantern," "The Expendables," "Jonah Hex" and "The Curious Case of Benjamin Button" -- that get most of the headlines, Day said New Orleans' indie scene is a vibrant one.
"We've got tons of indies -- let me get my list -- there are so many I can't even remember," she said.
Among the independent films that shot in New Orleans in 2009 were "The Somnambulist," "Stewie," "Cotton," "Leonie" and "Dead of Night." Additionally, "Welcome to the Rileys" -- which shot in late 2008 with James Gandolfini, Melissa Leo and Kristen Stewart -- will debut this week at the Sundance Film Festival, and the comedy "Snatched," another local indie production from 2009, will unspool at in conjunction with the Slamdance Film Festival.
The full rankings, which are included in the magazine's Winter 2010 issue, are as follows:
1. Albuquerque, N.M.
2. Los Angeles
3. Shreveport
4. New York
5. Austin, Texas
6. Stamford, Conn.
7. Boston
8. Detroit
9. Philadelphia
10. Seattle
Posted by Christopher Moore at 2:30 PM

These are some great tools that i definitely use for SEO work. This is a great list to use in the future.. buy dvd major crimes season 6

Thanks you very much for sharing these links. Will definitely check this out.. buy dvd when calls the heart season 4