It's true. 'Year One' built Sodom in Sibley. by Alexandr Kent 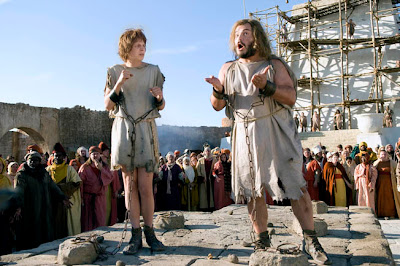 You thought Sodom was destroyed by fire and brimstone? Perhaps, until Sony Pictures got their hands on new building plans. The studio built a replica of the ancient city of sin near Sibley for "Year One," a biblical comedy opening Friday.

The set, without question, is the maddest to have been built in northwest Louisiana. At peak, the construction crew hit 300. The six-acre set, replete with a giant bull head idol, massive palace doors and 90,000 square feet of foam walls and equal footage of paver stones, sits atop a sand pit surrounded by swamp land.
Sounds crazy? Maybe just a little, even to the movie's production designer.
"I know there have been big sets, but that is certainly the biggest one I have ever worked on," Jefferson Sage said. "I think that is one of those rare few that come along every once in awhile. It was kind of exhilarating, fun and terrifying at the same time."
It took about three winter months to build, and was used (onscreen) to sacrifice virgins, stone cavemen and generally represent a chaotic, free-spirited city of the ancient world. At times, it played host to 700 extras and many, many critters, not to mention the film's stars, Jack Black and Michael Cera.
Sage said director Harold Ramis wanted every detail — from the faux stone walls to the slave collars, to look real.
"We had a very large building crew," Sage said. "Carpenters, plasters, painters ... it was a vast operation. There were guys there to just fill the gas tanks."
Jason White, who owns the construction material company Foam-It, got an opportunity to apply his trade to the big screen. He and a team made and carved the high-stone walls — which are really foam attached to timber frames — surrounding Sodom. His tool of choice? He opted for the gas-powered chain saw, while others went electric.
"For somebody like me who enjoys a really good challenge, that is all you want right there," White said. "It took us just a little over two months."
How will it look?
"I'm extremely confident that it's going to look great," said White, who credited foreman Anthony Henderson and others for coordinating a huge build.
Christopher Moore, an experienced metal artist and prop maker, was tasked with making all sorts of nutty stuff. Need an ax? He'll design nine. Slave chains in steel and leather? OK. Carve a bull's head into a copper water pitcher handle? Coming right up. Fire pits? All right.

"For me, the most amazing part was they didn't skimp on anything," Moore said. "When you look at the palace doors, those are real wooden doors with steel hinges."
He too credits a crew that put in long hours and invested in the movie's meticulous vision.
"If they pay attention to the movie, they will be amazing by the sets, because everything is fake," Moore said.
Phillip Jordan Brooks, who worked as an assistant location manager, sums it up best.
"It was really amazing," Brooks said. "The construction crew was just phenomenal. They were brilliant. They were efficient. There were just tons of people working on there down at the end."
And once it got done and filming commenced? Brooks remembers extras sneaking in fishing poles to fish in the swamps, and watching camels get wrangled every day.
"Period oxen. Horses. Goats. Chickens. Primates," Brooks said. "It was like a Fellini movie."
By Alexandyr Kent • akent@gannett.com • June 18, 2009 Shreveport Times

Posted by Christopher Moore at 9:11 PM