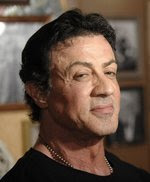 
Mickey Rourke is headed to town to work on the action-thriller 'The Expendables.'In what has become an annual rite, local film industry activity is rising with the temperatures, as a number of major productions -- with a number of major stars attached -- come to town to take advantage of New Orleans' springtime scenery and the state's tax incentives.

And all that's just on "The Expendables," an action thriller from Nu Image/Millennium Films set to shoot for nine weeks locally starting in late April -- after a three-week stint in Brazil -- and one of three high-profile projects scheduled to set up camp in New Orleans this spring.

The movie, about a team of mercenaries involved in a plan to overthrow a South American dictator, is based on a script by Stallone, who will star and direct. It recently earned headlines when it was announced California Gov. Arnold Schwarzenegger would play a bit part in the film, but those scenes reportedly will be shot in California.


Sylvester Stallone will direct and star in 'The Expendables.'"The Expendables" will be joined in town by the DC Comics film "Jonah Hex," a Warner Bros.-backed supernatural Western that will star another recent Oscar nominee, Josh Brolin, in the title role, and two-time nominee John Malkovich. (And which, according to the Hollywood Reporter, is this close to landing Megan Fox of "Transformers").

In a July interview on the set of the locally shot dramatic comedy "I Love You Phillip Morris," starring Jim Carrey and Ewan McGregor, "Jonah Hex" producer Andrew Lazar ("Get Smart," "Confessions of a Dangerous Mind") said the film would take advantage of the area's stock of old forts and other Civil War-era settings.

It will shoot from mid-April through June.

At the same time, Brandon Routh, who starred as the Man of Steel in 2006's "Superman Returns," will be in town for the indie project "Dead of Night," another supernatural-comics-inspired movie (translation: potential movie franchise).


Oscar nominee Josh Brolin is coming to play the title role in 'Jonah Hex.'That one is inspired by the Italian comic book "Dylan Dog" -- which is the name of Routh's main character -- and tells the story of a private investigator who stumbles onto the world of the undead. Originally set in London, the story has been reset in Louisiana for the film's purposes.

Greg Cannom, who last month won his fourth Oscar, for his makeup work on the locally shot "The Curious Case of Benjamin Button," has also signed up for "Dead of Night."

Add to all that the continued local presence of two major TV productions -- the Disney Channel toddler-targeted "The Imagination Movers" and the HBO drama "Treme" -- and the local film industry appears to be in full stride. That's a big change from recent months, which saw a lull in major projects dating back to the wrapping of Werner Herzog's "Bad Lieutenant: Port of Call New Orleans" in late August, and two movie-of-the-week projects in early December.

A recent Twitter update from a local film-crew member said it all: "Drought for months and then all of a sudden job offers from everywhere, and different departments even."


Brandon Routh is set to work on the supernatural thriller 'Dead of Night.'That whole slow-winter/busy-spring thing has become a reliable local trend, as film projects flock to south Louisiana in the spring and summer, slow to a trickle in the fall, then all but dry up in winter.

"I kept telling everybody, 'Don't get too upset,' " said Jennifer Day, the head of the city's Office of Film and Video, of the recent winter doldrums. "Granted, our pace is slightly less than last year, but to be honest, 21 major projects (in 2008) is pretty amazing. You can't have a record year every year. We're really looking at a sustainable number of projects coming."

Those include five additional "solid leads," Day said, although they're not solid enough for her to reveal details. (One can safely speculate, however, that Forest Whitaker's planned Louis Armstrong biopic is likely one of them.) There are a handful of others considering shooting in the area but are not seen as slam-dunks just yet, Day said.

"There's a natural ebb and flow," Day said. "This is not a traditional industry. We forget that. We have to keep reminding ourselves that this isn't a 24/7, 365 industry. It's a project-by-project industry."
Posted by Christopher Moore at 2:06 PM